I decided to try a twist on a seasonal cookie this month.  March 9-10 is Purim in the Jewish faith, and Hamantaschen are the treat associated with that holiday.  Hamantaschen are a triangular cookie with a filling in the pocket, typically a jelly.  According to My Jewish Learning, the most common interpretation of the cookie is that “they resemble the three cornered hat worn by Haman,” although other interpretations say that  “in Hebrew the cookies are called “ozney Haman” which means “Haman’s ears” and refers to the custom of cutting off a criminal’s ears before his execution,” or the idea that “each corner of a hamantaschen represents one of the “fathers” of Judaism—Abraham, Isaac, and Jacob.”  Regardless of the lore, these cookies are common during Purim.

As mentioned, hamantaschen are often filled with jelly, but other fillings such as Nutella have started showing up.  I decided to try filling them with marshmallows (kosher, of course!).  I had several very unsuccessful attempts, as the marshmallows tended to dissolve straight into the cookie when baked.  But, I found that if you insert the marshmallow with just about 1-2 minutes of baking left, a sticky sugar pool remains in the pocket of the hamantaschen.  This was a nice alternative to the idea of having an uncooked, white marshmallow in the pocket.  Purists will, no doubt, dislike this idea.  But, for those of you willing to mix things up, check it out. 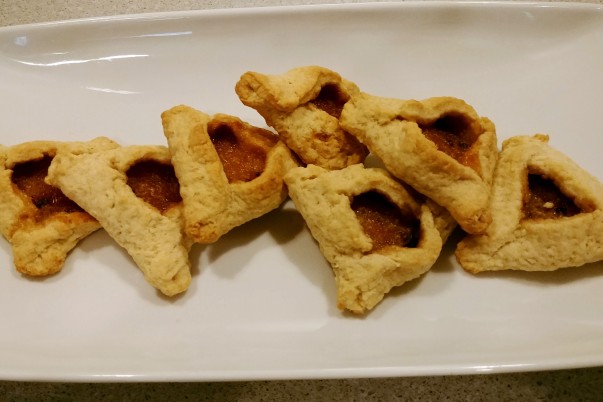