Since my last post, I visited Haiti where I helped build homes for those who lost them in the earthquake nearly 2 years ago.  I kind of suspected that I’d come back with no good baking recipes to share, and I was right.  We had no desserts, and overall the food left a bit to be desired.  This surprised me a little bit since I really love Dominican food; the similarities ended at rice and beans.  Several times we were fed fish spaghetti, which is basically plain spaghetti noodles with fish juice.  Seeing as I don’t like fish, this was especially delicious.

So, I have no special Haitian recipes to share with you.

For Thanksgiving I was still playing catch-up from Haiti, and both items I prepared were taken from earlier posts – Apple Cinnamon Cheesecake and Pear Cranberry Crisp.  Nothing new this year.

After Thanksgiving, though, I did have some time to bake and decided to try a Chocolate Babka bread that was recently featured in “Cooking Light.”  Apparently babka can mean different things to different people and cultures, but from what I can figure out the type of babka that this recipe creates is a variation on an Eastern European Jewish tradition.  It’s a yeasty bread that has chocolate swirls, so you kind of aren’t sure if it’s a bread for dinner or dessert.  Perfect for a snack though! 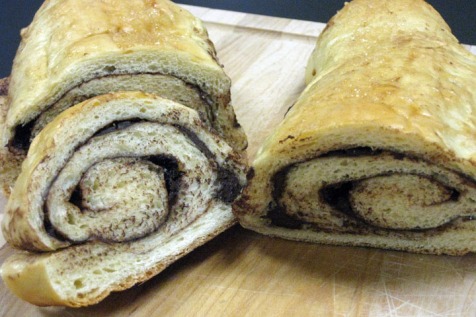 This entry was posted in Baking Jumbles, Bread Jumbles and tagged bread, chocolate. Bookmark the permalink.