I had an entire 3-day weekend, mostly unscheduled, which looked promising for lots of fall baking.  First thing Saturday morning I got started on Caramel Apple Cinnamon Rolls because they needed lots of time to prepare.  After kneading the dough it had quite some time to rise, so I moved on to my next kitchen project: Butternut Squash.  This is where the story gets interesting.

I don’t really like squash of any kind.  But, trying to be a grown-up, I now take that as a challenge to find a way to prepare something that I don’t like and turn it into something I do.  So, last week when a friend offered me a slow-cooker butternut squash recipe that included butter, brown sugar, and raisins, I knew this may very well be that magical recipe.

Considering the fact that until that time I didn’t like squash, it should come as no surprise to anyone that I had never purchased, much less prepared it.  Apparently the entire world except me  knows that butternut squash is very hard to cut.

I have a dull knife (not worth getting into this, but I’ve known for some time that my big knife needs to be replaced and I truly intend to do it very soon).  Not so dull, however, that it doesn’t cut through something fleshy.  Not fleshy like squash, but fleshy like my finger.

Eek!  I saw the cut and immediately realized this was not a Band-Aid sized job.  Band-Aids tend not to reattach flaps of fingertip.  I ran (quite literally) to the hospital a few blocks away.   I called my mom from the waiting room.  It went something like this:

Me: Mom, I’m in the ER.
Mom: Why?!
Me: I cut myself with a knife and my fingertip isn’t where it should be.
Mom: Didn’t you just take a knife skills class?
Me: No.  I signed up for one but didn’t take it yet.
Mom: You should probably do that.

When I came home, I still had all of my finger plus six very seasonal (Frankenstein-ish) stitches holding me all together. 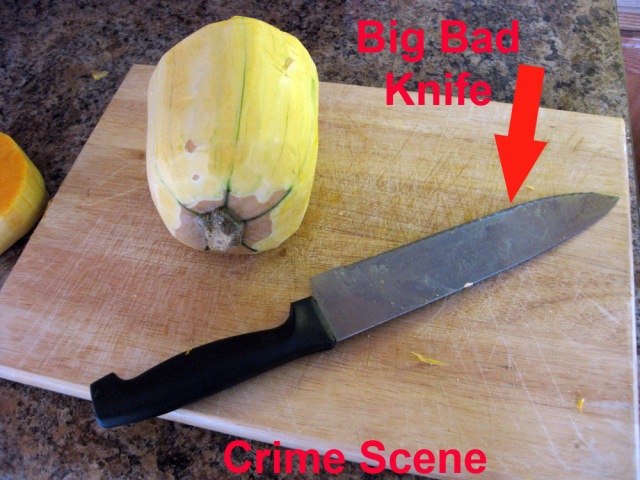 As would only be right, as soon as I got home the first thing I did was finish the butternut squash and cinnamon rolls, and both were very good.  Plus, I can now say I sometimes like squash.

Now here I sit, pecking at my keyboard with a crippled hand.  Surely this blog entry will take twice as long as the others to write, so I hope it gives you a laugh.

I wasn’t intending to publish the squash recipe (it’s rather informal anyway, a dash of this, a hunk of that).  But, I do want to tell you that another friend, after hearing of my mishap, tipped me off to a squash trick.  Zap it in the microwave for a few minutes to soften it up a bit.  This makes it much easier to cut through.  Take that tip and run with it…preferably not to your local Emergency Room.